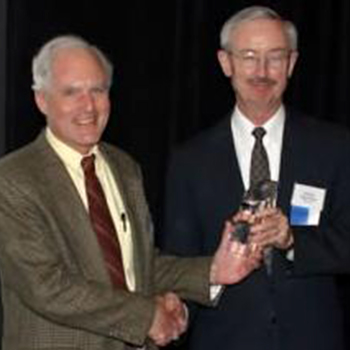 “I like to go into a store and see products on the shelves in whose design I had a part, especially if they involve new technology. I suppose that, deep down, I regard standards body work as a sometimes-necessary evil on the path to new products. That said, I have been a more-or-less cheerful and often-amused participant in the digital television processes for 15 years (I’ve noticed how much older my colleagues have become). I also believe that I had the best job in ACATS chairmanship of the System Specific Testing group.” These somewhat disparate comments reflect John Henderson’s thoughts on his involvement ‘since before history, or so it seems’ with the ACATS, ATSC, and CEA processes. and the T3/S11 specialist group on Compliance.

He is thankful that the groups have not yet had simultaneous active periods. Currently, T3/S10 is writing a voluntary Recommended Practice that contains receiver front-end performance guidelines. Clearly searching for the right word to describe the group’s sometimes highly charged deliberations, Henderson settled on “exciting.” Henderson’s immersion in consumer electronics product development and technology application began immediately upon graduation from college, when he joined RCA Laboratories. He continued with RCA Labs and its successor, Sarnoff, until 1991, when he joined Hitachi America R&D. As an individual contributor, team member, or manager with RCA and Sarnoff, he has contributed to television tuner control systems, IF filter design, video, and to systems brought by Sarnoff to the ACATS process. At Hitachi, he has managed digital TV, cable modem, and wireless modem product design. He holds more than 25 issued US patents and has presented numerous papers in these areas.

He is a Fellow of the IEEE. Henderson received a BSEE cum laude from the University of Pennsylvania and an MSE from Princeton University. Henderson treasures the recreational time that he manages to set aside. He is a fairly active bicycle rider, peddling about 5000 miles per year, with usually half of this distance being on a tandem with his wife. He is an amateur classical and church organist, having taken organ lessons at Westminster Choir College in Princeton “until work demands overwhelmed the required practice time.” He likes to sail, and, although he no longer does much racing, he and his wife day-sail a traditionally gaff-rigged 19-foot catboat. He enjoys woodworking and building small boats (“limited by what I can get out of the basement”). Return to the awards list.